Have You Visited Salut Ruins In Oman?

Salut is an archaeological site near Bisyah village close to Jabreen in the Al Dakhiliyah region of Oman. Salut archaeological site is home to an ancient fortified collection of ruins and fortifications, some of which date to over 3,000 years ago, and which offer important evidence of the development of civilizations in the Arabic peninsula in the Bronze and Iron ages. Salut is a great place to visit, whether you are interested in the ancient history of Oman or just want to explore an archaeological site as part of your visit to the country, perhaps after visiting the beautiful Jabreen Castle. 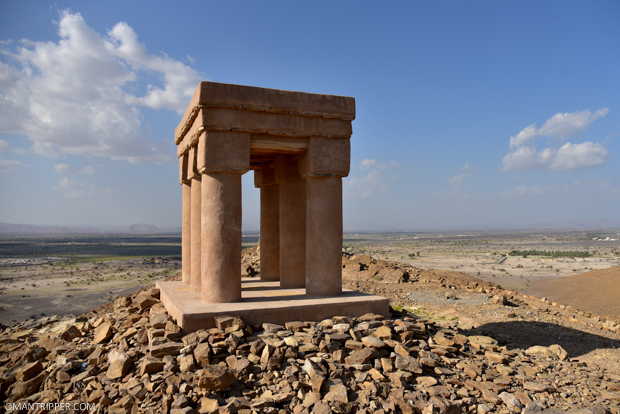 Even though I stop by Jabreen almost every time I visit Al Dakhiliyah region, I had never realized that there is such an important archaeological site like Salut a few kilometres away. On the way there, the first thing that strikes you is a temple-looking structure on top of one of the hills and a nearby beehive tomb. As you get through the plain between the hills, you may not expect to see much of the ruins that distinguish Salut from the surrounding hills, sands and rocky outcrops; however, you will be surprised to see the remains of Salut Castle distinctively appearing in the landscape, providing a clear indication of the significance of the castle at the time and its ancient grandeur. The castle is partially re-constructed with more work on-going and is located on a small hill above what must have been an ancient oasis through a wadi. You can go for a brisk walk into and on top of Salut Castle remains (took us less than 10 minutes), and from there you get a clear view of the vegetation growth around the castle complex, which gives a good indication of the abundance of groundwater. We have also heard from some of the people we spoke to that the area does indeed get affected by Wadi floods from time to time. A couple of hundred meters away from Salut castle there are the remains of what is thought to be an ancient tower and what looks like a water channel system that is likely an ancient irrigation system. For a better view, you should drive around the other side of the hill overlooking Salut Castle (where the beehive tomb is), park your car and follow a marked path to the tomb and the temple looking structure (which we found out to be another burial site). 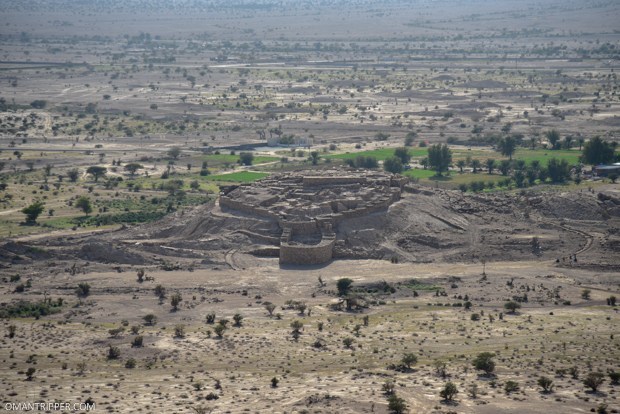 Salut has been long identified as a very important site for not only understanding the history of Oman but the history of the whole Arabic peninsula and the migration of Arabic tribes into this the region. Excavation work carried out in Salut has dated buildings as old as to be in the period between 1,300-600 BC, with various bits of pottery and tools fondÂ that connect Salut site with settlements elsewhere in Oman and beyond. If you’re lucky to visit during the winter months, you might even see one of the archaeologists working in Salut. Due to its importance, Salut has been undergoing extensive excavation work for a while now, with an Italian team (part of the University of Pisa and with association with His Majesty’s office for Cultural Affairs) conducting annual campaigns in Salut since 2004.

Now, even though you might not be able to tell much about the archaeological history of Salut by just visiting the place, I reckon it is still an area you should consider visiting, especially if you combine it as part of your visit to Nizwa, Bahla or Jabreen. The scale of Salut Castle and the surrounding hills makes for a worthwhile stop that we definitely enjoyed and recommend.

travel to Ankara, The capital of Türkiye, with FlyDubai

a palatial pyramid escape FOR tHE WHOLE FAMILY at raffles dubai

flydubai prepares for a record-breaking summer